Midnight Man and the Okoboji Girl

Web-based video sites like YouTube and Vimeo are a god-send for audiophiles like myself. Whether it be revisiting some of your favorite music videos from childhood, checking out classic interviews from the past, or watching bands perform live that were around before your time  – these sites have it all. Despite all these unearthed, invaluable treasures, my favorite online music related video has remained the same the past few years, and it has nothing to do with Bob Dylan, Husker Du, or Archers of Loaf. In fact, the video is not even in the same vein of entertainment.

The video that I find myself watching over and over again was created by a guy I knew a long time ago, during my first few years of college. At that time, I was a journalism major (this blog is a direct result of the music reviews I wrote for the college newspaper). While taking a class called Journalism and Mass Communication, I met a classmate who went by the name “Midnight Man.” The name was self-bestowed, a radio pseudonym he used despite the fact that his weekly college radio show was at 10 am on Tuesdays. The moniker was not intended as a tongue-in-cheek joke, rather an attempt to brand himself in the same way as legends like Wolfman Jack and Cousin Brucie once did. Nothing Midnight Man did was intended to be a joke.  As producer of the college nightly news, he infused the broadcast with over the top, outdated graphics that screamed satire, when in fact, the Midnight Man truly believed in the greatness of a star-shaped wipe or random bursts of floating sparkles obstructing the screen.

After college, Midnight Man got a job doing commercials for a local channel (all done in his unique style), and he also started up a cable access show.  When back home visiting my parents, my friend Tim and I would get together and when our beer and Doritos supply was dwindling, we would end the evening with a viewing of his cringe-inducing attempts at humor (here’s a clip from their show – Midnight Man is the voice of “Duck Lobardi”).  After a couple years of shows, Midnight Man was suddenly absent from the program and all that remained was the blonde dude with the forced laughter and his penchant for exposing his hairy chest. Years past and we began to think we would never see the legendary Midnight Man again.

After years in hiding, Tim made a startling discovery  – he’d found a music video of a band fronted by Midnight Man! This would be a great find regardless of the content, but the combination of the images, the music, the lyrics, and the graphics proved to be better than anything Midnight Man had produced before. The song, entitled “Okoboji Girl,” talks about a broken relationship with a girl from a midwest tourist destination known as Okoboji. The fact that there is only one brief shot of the actual Lake Okoboji is the least of the issues with this clip.

For your viewing pleasure – “Okoboji Girl” (I’ll provide an in-depth analysis in just a moment…):

Is this video only funny to those who knew Midnight Man? Or does its humor go beyond the inner-circle? I guess those are the questions I’m trying to tackle here. Let me illuminate a few of the elements that have made this  my favorite YouTube video for the past two years.

Visuals– Unfortunately, the video provides just a sampling of Midnight Man’s reliance on cheesy graphics and filters (although the silhouette shot at the one minute mark is vintage Midnight Man), but what I really love are the scenes of him roaming through the halls of an abandoned apartment building screaming (did you notice the hole in the ceiling?).  These scenes are only matched by the images of him angrily marching through a cemetery with his his fists clenched. 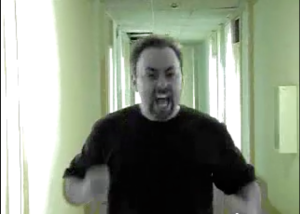 When the full band is shown, Midnight Man splits his attention between two tasks – staring at his hands to ensure he is playing  the correct chords and glancing at the monitor, making sure he is front and center while his mystery band sways back and forth in the background.

Another mystery of the video – who is the girl? A fun drinking game is taking a swig each time you see her in a new costume. I often wonder if Midnight Man created this video just to have an excuse to video tape a girl dancing (not to mention roll around in bed with him).

Audio– Often the lyrics get lost in the enjoyment of this video, but when you take notice, you’ll find that the worst/best aspect of the song may in fact be the words. Take the first verse, for example:

I went outside and watered the flowers yesterday
I tossed and turned, I couldn’t sleep in the bed we made,
I took the car for a spin, couldn’t get away
I see you in the dark of night.
I heard a song on the radio, it made me cry
places to eat, places to shop, everyone says “hi,”
looked in the mirror, there’s a change deep in my eyes,
cause everything, looks like you.

I don’t really need to comment on the randomness and hilarity found within this verse alone. I’m not sure whether my favorite part is his annoyance with people saying “hi” or if it’s the random detail about watering flowers. The fact that this line is coupled with an image of burning roses puts it over the top. 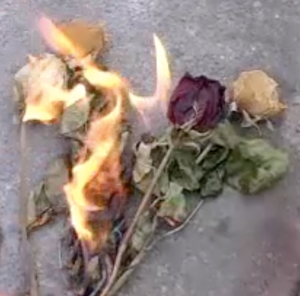 The first chorus is followed by what is either the worlds greatest guitar solo or simply a guy playing the same three notes up and down the fretboard (1:57). But this is the least of the song’s problems. The drums, despite being artificial, somehow seem off, possibly a result of the guitar riff changing time throughout.

My favorite musical element is the deep guitar riff that kicks in during the chorus, “Bow, Bow, Boowww. Bow, Bow, Booww.” I can’t help but sing along to it. And therein lies the greatness of the clip – it’s actually a catchy song (at least after 200 listens).

In the same way we can all sing Rebecca Black’s “Friday” or Tay Zonday “Chocolate Rain,” Midnight Man has stumbled upon a memorable chorus that belongs in the same pantheon as these internet sensations.  This leads me to the goal of this blog entry; I didn’t write this to simply rag on my former classmate. He’s a nice guy and means well with his videos.  My goal is to give Midnight Man the one thing he’s always wanted – fame. His yearning to be famous is found all over his YouTube page, whether it be his movie “The Masquerade of Wolves,” his stint as a manager for AXW Wrestling, or his appearances on a local radio station. It’s pretty obvious that this guy wants to be known beyond the shores of Okoboji.

I would like to help make this happen. “Okoboji Girl” already has 40,000 views, but I want it to be even bigger. I want to see Midnight Man get a web redemption on “Tosh.O”; I want to see him singing on “Good Morning America” like Rebecca Black did last year; I want him to be seen in one of those  Super Bowl ads that takes advantage of internet video stars. I want Midnight Man to be a household name.

Here’s how we can make it happen: if you laughed at this video and got even half the enjoyment that I get out of it, share it with friends and family. Post it on your Facebook, link it on your Twitter, or post it on your own blog for others to enjoy. With my dozen readers, this may be a pipe dream, but it’s definitely worth a shot to give the one and only Midnight Man the fame he rightly deserves.

17 responses to “Midnight Man and the Okoboji Girl”